Oval Above Ground Pool Out of Level

I have a 15x24 AGP that has been out of level since first installed about 15 years ago. I am in the process of replacing the liner (1st time) and repairing rust spots in the walls.

I've already read your post on fixing an out of level pool, but it appears that this is only applicable to a round pool, as the oval pools have supports that jut out on the long sides that would also need to be addressed, right?

Obviously, the pool didn't collapse in the 15 years since it was first installed, so I suspect that it will last another 10-15 years without collapsing, but I was hoping to be able to get it a little closer to level before completing my repairs. The pool is sunk in the ground all the way around, about 6 inches on the low side (i.e., the side where the water comes all the way up to the top of the pool) and almost 2 feet on the high side (there is a slope on that side of the pool that had to be dug into at the time of the original install).

There is a 4-5" difference in the water level when the pool is full. Is there a relatively simple way to get this more level, or should I just deal with it as it is?

There is no simple way to level it, but if you want it done, now is the time. Any area you plan to work on you would first need to dig the dirt out from around the outside of the pool. You could easily damage the pool frame trying to

raise it with dirt packed around the outside.

If the pool is fairly level from one end to past the braces, and just the other end drops off, that could probably be raised easily. You would dig out the dirt from outside the pool, remove the cove from the inside, and raise the rails and footplates. If you do this slowly, a little at a time, packing dirt back under the rails as you go, it can be done without causing any pool damage.

I use a round point shovel and insert it in and under the rail, or footplate, and then slowly push down on the shovel handle. This gives me the leverage needed to raise the pool. While one person is working the shovel another person is filling in under the rails and footplates.

Once this is done the cove can be put back into place. It is very possible that raising the low end will require more base sand to be brought in. You want to keep the inside base as level as possible.

If you are planning to level the side braces also, be very careful. The entire brace assembly needs to be raised equally, including the block the assembly is sitting on. More sand would then be required to cover the pressure plates so that no bare metal comes into contact with the pool liner. 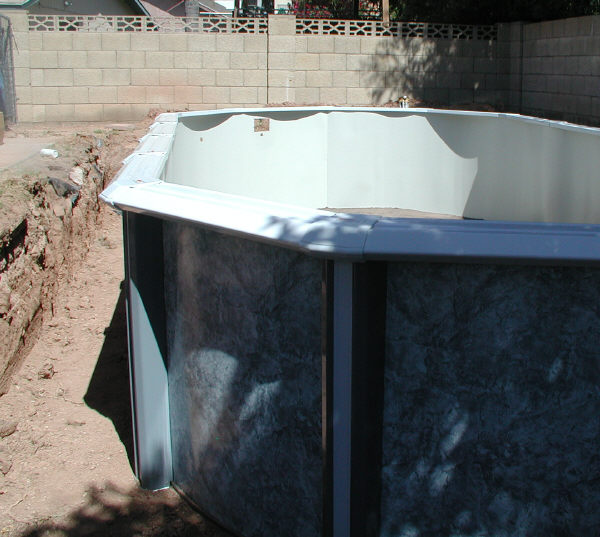 Being 4-5 inches out of level with a pool 6 inches in the ground is not a problem. The ground around the pool will keep it from collapsing, so it's just a visual thing, and possibly a usability issue. If it were mine, that would really bother me, and I would fix it. To me it would be worth the time and effort.