Shade Builder
The place where all your shade needs are covered
Menu
Home: Awnings

Maybe The Best Ladder Ever Made

I have installed aluminum awnings for over twenty years now.  My first couple years were spent climbing old wooden ladders or falling apart aluminum ones.  One fall day my partner called saying he had just got back from the state fair.  He had seen the neatest ladder ever and the salesman told him the fair display model would be for sale in a couple more days.

I just about flipped when he told me the price, $325.00.  I had never paid that much for a tool in my life.  I had just a couple of days to think about it.  My wife informed me that a ladder would be the only tool I would risk my life on daily and why shouldn't it be the most expensive.  To keep Jim and my wife happy I said I would take a look.  After the salesman showed me everything this ladder could do I was still scared to spend that kind of money.  It took a little more coaxing from the salesman and my wife but I did it.  He got my money but I had to come back on the last day of the fair for my ladder.  Two trips to the state fair plus $325.00.  This ladder got real expensive real fast.  As it turned out it was the best investment I ever made.  Nearly 20 years later I still use it almost daily. 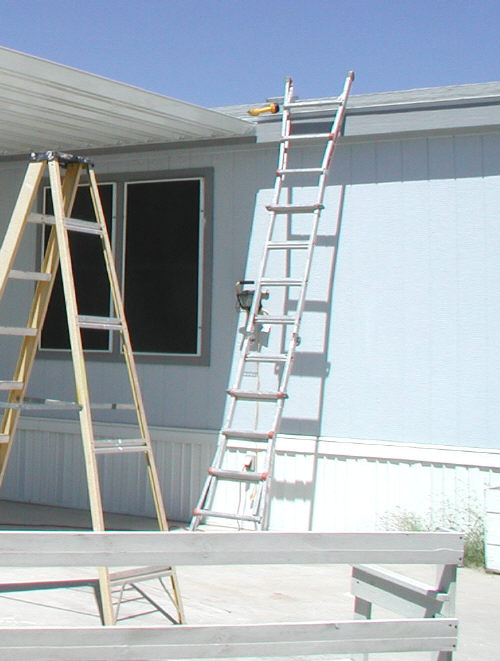 If you think about this ladder in terms of cost or value, here's what you get.  Over a twenty year span I would have gone through at least ten $100 ladders.  I won't even take into account the fact they would not have been half as save, just the dollar value.  In twenty years that would be at least $1000.00 in ladders compared to the $325.00 I spent.  That is cost verse value.

On my awning installation page you will see my Little Giant in use.  First in the low position and later set up high.  When installing awnings on Park Models there are always things in the way like steps.  Instead of having to move them I just lower one side of my ladder.  When the awning panels are up and it's time to get on top and install the flashing my ladder becomes an extension ladder.  It is much saver than getting on the roof from an a-frame ladder.  Some of my ladder time is spent at the top with one leg on each side and my butt sitting on the top steps.  I am dangerous on a ladder with steps only on one side.  When I get to the top I always want to come down the other side.  I just do it out of habit. 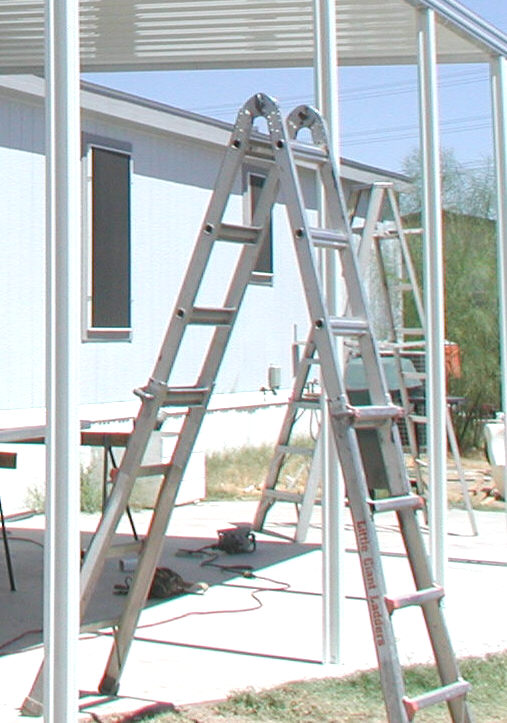 A couple years after buying my Little Giant ladder I was in need of a replacement for one of my other ladders that had bit the dust.  I was at Costco and came across a ladder that looked like it had all the features of my giant but a lot less expensive.  In less than two years it was so bent and banged up it would not open and close.  I never tried that again.

My site is well over a hundred pages about building shade and above ground swimming pools.  This is the only page you will find me personally endorsing a product.  I do this only because it was the best buy of my life.  If you need a good ladder then you need to check out the Little Giant Ladder.

Follow the link for the best selection of Little Giant Ladders.