Shade Builder
The place where all your shade needs are covered
Menu
Home: Awnings

Building Under An Aluminum Awning

Awning structures are the many things that can be built under an awning or attached to it.  Sheds, decks and room additions can all be built under your patio cover.  Shade screens or window awning flex pans can be attached to the supports for nice wind and sun blocks.

Below are a few pictures and ideas that you could do with your awning. 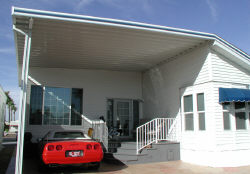 This is an Arizona room Attached to an awning.  The awning, Arizona room and deck are built off a park model located in an RV Park.  Notice the nice canvas window awning on the front window. 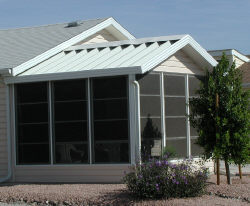 This is an awning built off the front of a mobile home.  Under the awning a vinyl room was built.  It is mainly a screen room with vinyl siding attached to the outside and vinyl windows inserted into the screen openings.  The vinyl windows are great for blocking the wind and sunlight and also open up to 75% for maximum air flow.  These are stackable windows and will stack either at the top or bottom.

This is an awning built off the rear of a Park Model.  Attached to this awning is a matching shed and some nice handrail.  Sheds can be built to match the siding of the home they are next to.  Add to that the color bands in the awning and maybe a window awning or two and the whole package looks pretty good. 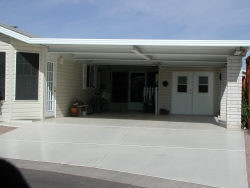 The awning structures under this awning are a large screen room and a big shed with double doors for the golf cart.  Notice the sturdy construction of this aluminum awning. 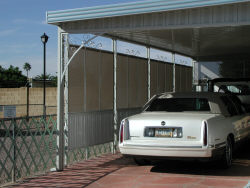 On the outside of this awning they mounted shade screens on the top for shade and some aluminum kick plate in the lower section to keep the pets off the screen.  They also attached a boxed end to the front of the awning.  They add a little more shade and some artistic style to the awning. 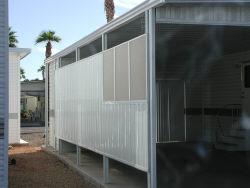 On this awning they added an aluminum privacy panel and included a couple sections of shade screens for a little more air flow.  A boxed end in the front was again added. 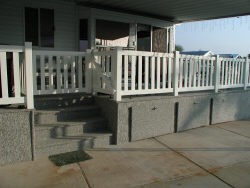 Under this awning they added a very large deck.  The large pull out drawers are tricky to build but can add so much extra storage space.  The beautiful vinyl fencing was installed to keep the dogs from running off.